Hook/look rhyming slang aside, I noticed a traditional butchers today, complete with straw hats and lots of delicious looking organic cuts in the window. It looked so good, I’ll have to go another time when I’m looking for something special … and am visiting Holland Park again. 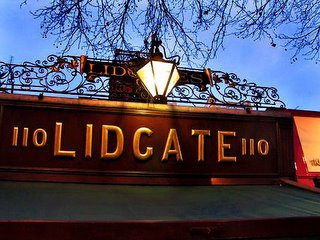 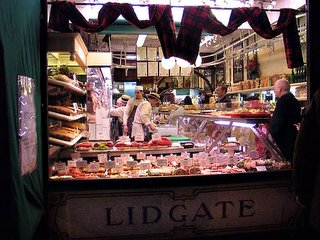 I also went to the third-last day of Degas, Sickert & Toulouse-Lautrec at Tate Britain. I hoped to beat at least some of the queues by going on a week-day, but it was still crowded. However, it was completely worth it. The exhibition was meant to show the dialogue between British and French artists in the late 19th and 20th centuries. What I found fascinating was looking at some of Degas’ work where he’s deliberately cut off or through some of his subjects, as if he’s a taking a snap-shot. The work is still balanced, but not in a traditional way. His painting of a show, looking from the orchestra pit, has the musicians captured in detail, with the people on stage appearing as grey-greeny squiggles, fairly much out of focus – or whatever the painterly equivalent is of a photographer’s wide aperture/small depth of field.

Walter Sickert had painted the most striking image of a singer (Minnie Cunningham) in a red dress on stage. Everything except the dress seemed muted by comparison. Where Degas made you look at the orchestra pit by his focus, Sickert made you look at the singer mostly through his use of colour. I don’t understand why so many portrait and wedding photographers seem to look only at other photographers for inspiration when there is art like this screaming ideas. What’s more, an exhibition comes with a built-in commentary to help you make connections and understand the context of the works. (Sorry, I’m finished on the soapbox for now).

On a completely different note, the room on “Elegance and Decadence in Portraiture” was far more predictable with centred subjects lit in a very flattering light (and the dress that Lady Colin Campbell wore is to die for). The portrait of Whistler, by Giovanni Boldini, does bear a striking resemblance to Catweazle, though (not surprising that Whistler apparently didn’t like it).

There was just enough time to see the four short-listed Turner Prize artists as well. The guy who won had pulled apart a shed, rebuilt it as a boat, gone down a river then reassembled the shed. He’d also photographed a platinum mine where its product was used to make the five platinum prints on show. Somehow it’s really satisfying to see art which feels complete, having a beginning, a middle and an end.

The sun was on its way out by the time I left the Tate’s Millais statue.