Only Smarties have the answer

I was asked “Do Smarties have the answer?” today by one of the Docklands Light Railway train captains when I offered him some from one of the new hexagonal tubes. He said it was one of the sweet’s advertising slogans. So I check and there is indeed an on-line fanzine with the slogan as its name and the manufacturer’s site says that 17,000 Smarties are eaten every minute in the UK. Well, our train captain wasn’t doing his bit for Smartie consumption today, but he could do mean EastEnd and Yorkshire impressions when not making announcements in his “posh” voice. He was such a honey, it was almost a shame to get off his train, but when I did, there was this ad, which I liked. I just wondered whether it was dreamed up by a man or a woman. 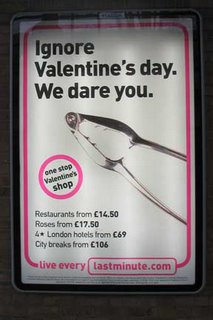