A Divine Dinner with Zandra

Women’s networking club Sister Snog held one of its Divine Dinners last night – or rather, one of the clubâ€™s â€˜Step Sistersâ€™, designer Zandra Rhodes hosted the dinner for about 25 women at her central London Penthouse Suite above the Fashion and Textile Museum. It was a fabulously warm evening with pink champagne on the roof terrace amongst lush vegetation and bright colours. The plants and colours continue inside with a number of items by artist Andrew Logan including a stunning chandelier with hanging “Z”s and a bust of Zandra, as well as a mirror mosaic bracelet which Zandra wore. Many years ago, I went to Andrew Logan’s home studio as part of London’s Open House weekend, which happens each September. Both his and Zandra’s home studios have bold colours and wonderfully OTT pieces as well as being on the top levels of their respective buildings. Since they’re both friends (indeed, Andrew popped in at dessert time) I’m not sure who influenced who, but I love both of their spaces. I can’t wait to get my new home, which won’t be nearly as large or as colourful, but is at least on the way.
Zandra made a fabulous hostess – and it’s not often that you get to eat dinner off Royal Doulton plates that she’s designed. The food was extremely yummy (including the first summer pudding I’ve had this year) and the company was excellent too. Sister Snog is a networking club for sassy business women that puts the twist into networking. No one-minute intros, speeches, piles of brochures or pressing your business card into everyone’s hand. 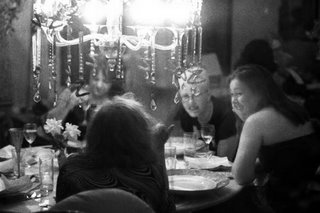 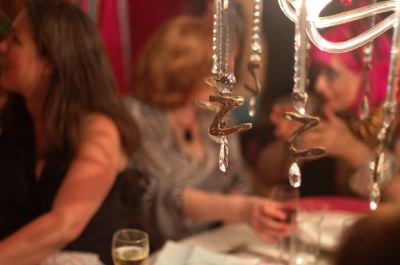